Indian developers are all geared up to offer NRI investors a wide choice of properties across India at an exhibition which is going to start on 16th March 2012.

It is the 20th India Property Exhibition in Doha on Friday which will showcase more than 100 projects spread across New Delhi, the National Capital Region, Jaipur, Mumbai, Pune, Goa, Hyderabad and several other cities.

The $12 billion realty market in India is on a high growth curve, because of the fast growing economy, increased participation of global players in the Indian market and new technological innovations. It will be located on NH-8 at a prime location in Sector 77, Gurgaon. The total investment will be Rs 500 cr on an area spread over 29 acres with the scenic view of the Aravalli Hills.Palm Hills are located at only a 20 min drive from Delhi`s International Airport and surrounded with green landscaped areas with Spanish styling architecture.

Palm Hills offers to house about 1250 units with an expectation to rise up to Rs 3,850 cr. With a starting price of Rs 48 lacs the company has already sold 650 units in the first phase. These apartments will give a feeling of a villa with unique features that no other developer serves. These will include 3BHK and 4BHK apartments with 1450sq ft to 1950 sq ft per villa. The villas have efficient floor plans and offer the choice to make amendments to maximize living space.

“The launch of Palm Hills marks the obligation of Emaar MGF to continuously develop properties with modern design concepts and gives the experience of living in a gated master planned community a new definition.”  Said Mr. Shravan Gupta, Executive Vice Chairman and Managing Director of Emaar MGF. He further added that “The exhilarating response on the very first day of the project launch is an indication to the predominating huge demand for quality housing in the mid-market segment”.

The rocketing success of Emaar MGF can be guessed by taking a look at their reserves. They have a land bank of 11,340 acres including the Commonwealth Games Village. They are currently working on 29 projects.

Emaar MGF which is a joint venture between domestic firm MGF and Dubai-based Emaar Properties is planning to utilize Rs 1,972 cr for part re-payment of debt of over Rs 5,800 cr. It will also be investing Rs 276.8 cr in paying development and license renewal charges in the coming year. 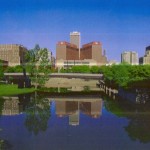