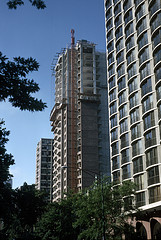 If earlier, the projects were developed up to 15 stories, now the number of stories has reached 40. It is still far lower to Mumbai where 60 storied residential projects are not rare. In Mumbai there are over 35 projects with 40 stories or more.

CBRE South Asia’s deputy MD (South India) Ram Chandnani says that the high rise culture is new in Bangalore. The developers in the city are positively looking at this new trend, he added. 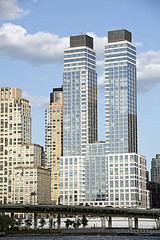 Bangalore developers to cash in from the demand for high rise apartments.

Equinox Water’s Edge has five blocks each of which has 40 floors. Placed beside the Nagavara Lake in Hebbal, the project offers a beautiful scenic view to the residents.

High rises offer a better lifestyle as it is characterized with less noise, less pollution, etc. Additionally these high rise apartments offer a sky view of the Nature that is really marvelous.