A farmhouse with all luxury amenities and facilities are being developed in Kanthitar. What makes this farmhouse more special is that this farmhouse belongs to M S Dhoni, the captain of Indian Cricket Team.

Ranchi, the capital city of Jharkhand is more famous for her brave son M S Dhoni. The people here really admire him and for them he is a real hero. 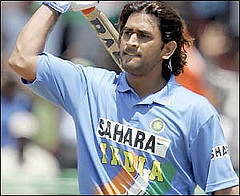 Dhoni is constructing a new farmhouse.

A Ranchi-resident named Lal Gopal Sharan Nath Shahdeo owned a plot of one acre adjacent to the under construction farmhouse of Dhoni. Out of his ardent admiration he decided to gift the plot to the Indian Captain.

Shahdeo is a family friend of Dhoni and so he could not refuse the proposal, said a close associate of the Captain Cool. Shahdeo is the heir of Ratu Maharaj.

Though the land was gifted to him, in the registry deed it, the land transfer, is mentioned as sale.

MS Dhoni is gifted one acre adjacent to his new farmhouse.

The plot which lies one kilometer away from NH 75 is not a costly plot and the land transfer is registered as a sale, said the Ranchi district sub registrar Shahdeo Mehra.

In the registrar’s office three plots were registered in the name of Dhoni, and his parents- Pan Singh and Devki Devi.

The farmhouse of Dhoni will have various game pools and a swimming pool. Besides these, the farmhouse also will have a full-fledged gymnasium and photo gallery of every sport.

The farmhouse is being built with various amenities and facilities and we hope to complete it soon, said one of the close associates of Dhoni. He is entrusted to look after the work in the absence of Dhoni. Now the project stands only at  halfway.

Currently the Indian Captain stays in Harmu Housing Colony where he owns a home. A plot in this posh housing colony was gifted to him by the government.