Shahrukh Khan –widely known as SRK got a new endorsement from Mahagun an NCR based real estate developer group. 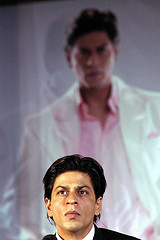 Endorsements always act as Extra Avenue of income for most of the Bollywood stars other than acting in films. Most of these endorsement deals bring a huge amount into their bank accounts. The rate of amount varies according to the rating of the star. Normally bigger stars get bigger amounts and it comes down in the order of hierarchy.

Latest of all Bollywood star endorsements is the SRK’s endorsement with an NCR based real estate developers Mahagun.

Shahrukh Khan has been a very prominent and successful promoter of many well-recognized brands which produce very expensive items like cars, men grooming products, watches, DTH brands, mobile phones, etc. These are only a few of his whole endorsements. This is the first time he has been endorsed by a real estate developer.

About making SRK Mahagun’s brand ambassador, Mahagun India (P) Ltd.’s Dhiraj Jain said that the group was having some similarities with SRK. Later he connected this similarity with “consistency in performances” which later was pointed as the reason of their success. Adding to it Mr. Jain further said that great names are created by consistent performances.

Meanwhile SRK is busy with promoting his latest film “Jab Tak Hai Jaan” which is to be released on Nov. 13on Diwali Day. Though he had not acted in any ads of the group, he appears on their web site.

The real estate firm has stated that they are all set to reach newer heights with having SRK as their brand ambassador.

Mahagun group has main basis in Noida and other parts of NCR where the group has developed nearly an area of 4.5 million sq. ft. The concentration of the group falls on commercial as well as residential projects. The group has so far delivered many successful commercial buildings which contain shopping malls and multiplexes.

Nearly 10.2 million sq. ft. are under construction. So with the one year endorsement with SRK the group aims to carve an appreciable niche for them in the real estate arena.

1 thought on “SRK Gets New Endorsement from Real Estate Firm”