Income Tax department’s investigation wing conducted raids on some realty players of Surat. From them, the department seized Rs.8 lakh in cash and jewelry worth nearly Rs.45 lakhs.

The latest Income Tax operation is one of the biggest operations in the recent period. More than Rs.92 Cr was recovered by the income tax department. The operation included some six major real estate developers and two leading advocates of the city.

They had conducted raids in Adajan Patia, Pal, V Arachha, City Light, Ghod Dod Road and Vesu- the places where the realty builders and the lawyers reside. The investigation wing surrounded the offices and residences of these builders and lawyers.

Nearly 19 bank lockers belonging to the developers were detained. The department seized Rs.1.3 Cr out of the Rs.1.5 Cr found in cash. 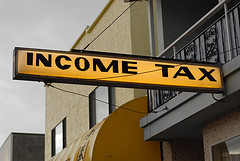 The latest raid on the developers is the third biggest raid conducted in the year 2012. Previously, the Income Tax department had recovered Rs.127 Cr from some real estate builders of the city. While this remains as the biggest the second biggest raid recovered Rs.111 Cr a logistic firm.