Koramangala, lying in the South eastern parts of Bangalore, is expected to offer higher returns to the investors. It has become one of the most sought after residential areas in the Bangalore Metropolitan Region (BMR). 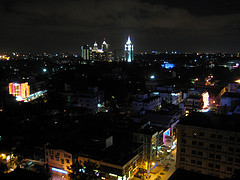 Koramangala in Bangalore has recently become a hot home -destination.

Guaranteeing higher returns to the investors, Koramangala has become one of the hotter real estate destinations in India. The large number of upcoming ultra-luxury residential projects, commercial malls and posh villas show how fast the area develops and becomes a better home- destination.

While speaking to Shweta Rao of Economic Times, Mr. Gaurav Pandey, Vice-President of PropEquity Research & Consulting, told that “having close proximity to many established commercial hubs in the Central, East and Southern regions of Bangalore, Koramangala has evolved as a premium residential market.”

Mr. Pandey added that there are only fewer vacant spaces in the area available for further realty development. This limited supply and increased demand will end up in price-hike. He added that due to this the property prices will increase further.

Despite the rocketing of property prices, buyers are still demanding for properties. Bangalore, the IT and ITeS driven city, grows along with the expansion of these sectors.  As IT and ITeS shows better growth, the city witnesses better demand. This is the same with Koramangala. The area is mostly sought after by the end-users and not by the investors.

As Koramangala is mainly sought after by the end-users and not by the investors, the area has better consistency than other investor –driven realty markets.

Real estate market of Bangalore remained stable unlike the markets of other metros. Mr. Pandey opined that Bangalore market is far better and more vibrant than other markets like Delhi, Mumbai or any other areas in the Mumbai Metropolitan Region or National Capital Region.