New Delhi: The Supreme Court of India agreed to hear the Sahara Group’s petition to seek amendments in its verdict restricting Sahara Chief Subrata Roy from leaving the country till the Group submits the property deeds to the market regulator Sebi.

A Bench of Judges, before whom the case was taken by the Sahara counsel, said to hear the plea in the chamber. The Sahara had appeared before the apex court on October 29 requesting that there was an error in its October 28 judgment, restraining the Sahara Chief from leaving the country.

Earlier the bench had declined to pass any interim pass for allowing the Sahara Chief to go abroad before his Group files a review plea seeking to modify the earlier order. 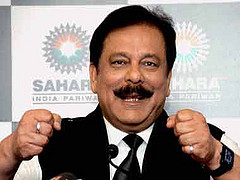 Senior Counsel CA Sundaram, appearing for the Group, had submitted the plea that the Group is not seeking to review the order but only showing the difference in the order which was uploaded on the apex court website and the order passed in the top court earlier.

Making it clear that there is no escape from depositing the investors’ money with the market regulator; the Supreme Court of India had asked the Sahara Group to give valuation reports of properties to Sebi.