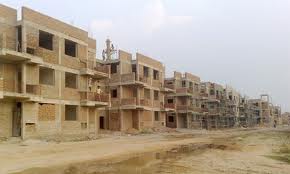 Noida real estate construction particularly some residential projects, received a stay from the Allahabad high court. Considering the petition of over fifty farmers from Sarfabad village, a neighboring village of Noida Allahabad high court gave the verdict. As per the stay residential projects which spread over six hectares of land in Noida Sectors 120 and 75 will be standing still.

The farmers alleged that their land was allotted to some real estate builders who did not fulfill the necessary requirements. They alleged that the land was handed over to the builders by the authority of Noida without the due fulfillment of the acquisition process.
Allahabad high court gave a period of two weeks’ time to the Noida authority to submit its reply. Though the next hearing of the same has not yet been declared the high court affirmed that it would take place within three weeks of time.
According to the petition of the farmers, a total land of 6.7260 hectares was leased to the real estate builders by Noida Authority. Farmers alleged that though this land was notified for acquisition by the authority of Noida under Sections 4 and 17 of the Land Acquisition Act on April 7, 2011, the process was not completed. Before the completion the land was leased by the authority.
The real estate builders who got the land soon started construction in sites. Sarfabad village contained 11 khasras of land.Farmers demanded both the cancellation of these improper lease deeds of private real estate builders with the Authority as well as the return of their land.
Amrita Rai, counsel for the farmers expressed his hope that the stay will affect almost 120 hectares of land. Presently only the land which belongs to the petitioners alone has been halted by the Court. But the stay will have an indirect impact on the above said 120 hectares of land too.  This land is currently in the possession and under custody of some six to seven real estate developers.
Revoking Section 4 of the acquisition Act, the petitioners demanded quashing of the acquisition procedure. They pointed out that the law clearly states the completion of the final award within one year since the imposition of the Section 4. They continued that the failure of the above said attracts suspension of the notification.
Prominent builders refused to react to the issue. They seemed tight-lipped over the matter how this stay or to what extent this stay would affect their ongoing housing projects.
Real estate industry data shows that there are nearly 10,000 ongoing dwelling units. There are several projects worth र 5,000-crore under construction. The court order may keep all these real estate projects at stake.
On the other hand Noida Authority said that land on which the order has been passed related to merely 500 sq. m. Officials told that so far no copy of the stay order has reached their office.  They added that they would have a detailed study over the implications when they receive one.