The number of Real Estate Investment Trusts (REITs) in Asia is expected to swell over the coming 3 to 4 years according to HSBC because of increasing demand for investments in more risk disinclined properties.

REITs invest in commercial properties mainly and pay rent collected from their properties to shareholders as dividend. This is why some investors see them as safer investments than property stocks.
Another advantage is that they usually offer returns that are higher than yields of government bonds.

The increased activity in the REIT IPO market this year especially in the Asian continent is due to successful listing of Cache Logistics Trust in Singapore. Also Sunway City plans to list its REIT in Malaysia come July.

At the Reuters Global Real Estate and Infrastructure Summit which was held today, Managing Director and Head of Real Estate Advisory for Asia Pacific at HSBC, Mr. Jason Kern had to say,
“I see proliferation of REITs, absolutely. I think we’ll have twice as many REITs in Asia as we do today in the next three or four years.”
He anticipates Singapore to witness most of the activity with more than 20 to be listed there in the coming years from companies all across Asia. It already has more than 20 listed REITs such as Fortune, Saizen from Hong Kong and Ascends from India. Australia and Malaysia are also showing growth patterns.

Kern further added, “What I find in my space is that investors are more risk-averse for sure. They are more defensive. We actually still find very strong demand at the most defensive end of the spectrum, which are the REITS.”

This Trend is only to bring fortune to our Country as well.

CapitaLand plans to exit the Indian real estate market. The Singaporean firm plans to exit some of its UK and Australia projects as well. 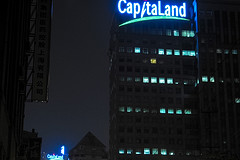 As many as 489 overseas investment transactions were carried out by various companies in March, as per the Reserve Bank data released Wednesday. Binani Industries invested a total of USD 323.34 million in its two wholly-owned subsidiaries based in Luxembourg and the US that are involved in financial, real estate and manufacturing services.

Two real estate deals in India — the sale of Leela Kempinski Kovalam and Noida’s deal with Wave Mega City Centre – have been ranked among the top ten in their categories across Asia according to a recently published study by Real Capital. Both deals took place in August 2011.

Real Capital tracks and analyses real estate deals worth over $10 million across apartments, hotels, retail, industrial, office and development projects over the world. The Purchase of Leela Kovalam by Saudi Arabia-based industrialist Ravi Pillai, which was pegged at about Rs 500 crore ranked 10th in Asia-list of largest hotel sellers.

Bangalore and Mumbai have been named among the most active Asian markets in the office space.

Delhi was ranked sixth and Mumbai eighth in the most active Asian apartment markets. Tokyo tops the list followed by Singapore, Hong Kong, Osaka and Beijing. While Chennai comes in at eighth position among active hotel markets, India did not rank in the big league when it comes to retail deals.

For most top property developers in India, the Non-Resident Indian (NRI) is a crucial part of their business.

Thus, despite the price rise of 43 per cent to as much as 166 per cent in various cities, the NRI cash is still flowing into the Indian property market.

Developers say sales in that segment are not as variable as the domestic Indian market.

“NRIs wish to have a second home in the country they belong to. Favourable government policies are also a driving force behind the increased interest of NRIs in investing in Indian real estate. NRI investments are the least volatile of all in our industry. They are assured that they are investing in an asset which they can fall back upon.”

Mr Sharma, who is also the vice-president of the Confederation of Real Estate Developers’ Associations of India, added that prices are rising because of the expanding infrastructure, which in the long run will help the buyer and increase the value of the property even further.

He said: “Upcoming projects like the metro, monorail and the international projects in the big cities in India have contributed to the inflated real estate prices in these cities.”

Amrapali claims that almost 35 per cent of its overseas business comes from Singapore.

No wonder it will be participating in Sumansa Exhibitions’ Indian Property Show to be held in Suntec City on April 14 and 15.

The sale of Leela Kempinski Kovalam was among the top 10 hotel deals in Asia during the past one year, shows data from the US-based research firm Real Capital Analytics.

Real Capital, which tracks and analyses real estate deals worth over $10 million across apartments, hotels, retail, industrial, office and development projects over the world, has also named Noida as a top site for sales in the development site category for a deal with the Wave Group for a mega mixed-use project. Mumbai and Bangalore also figure among the active office markets in Asia. In apartments, Delhi and Mumbai are part of the top league in the year ended March 31, 2012.

The Leela Kovalam deal, pegged at about Rs 500 crore, was the 10th in the Asia-list of largest hotel sellers during the one-year period. The Kovalam beach property was sold to Saudi Arabia-based industrialist Ravi Pillai last August.

The other big hotel players in Asia which sold properties at high value include Japan Hotel, LaSalle, Kingdom Holding, Hines and Shui On Group.

Even as Indian entities don’t figure anywhere in the top 10 global list vis-à-vis high value real estate deals in the financial year that just gone by, many of them have made it to the Asian hall of fame.

Noida, the industrial development area next to Delhi, is fifth in the development site sellers’ list in Asia. This was for a deal with industrialist Ponty Chadha-promoted Wave Group for the mixed-use project, Wave Mega City Centre, at an estimated price of $1.4 billion (about Rs 7,140 crore at the current forex rate), according to Doug Murphy, director (analytics) at Real Capital.

In the office space, Bangalore and Mumbai have been named among the most active Asian markets. “There were a number of locations for office sales in Bangalore and Mumbai, the largest being the Embassy Manyata Business Park transaction in Bangalore for about $537 million (Rs 2,738 crore) and Citibank building in Mumbai for about $224 million (Rs 1,142 crore),” Murphy said. Both transactions took place in August 2011.

India is nowhere in the retail top league where deals in Asia are concerned. Among hotels, Chennai is seen as an active market in the eighth position. Singapore leads as the most active hotel market in Asia, followed by Hong Kong, Shanghai, Tokyo, Beijing, Seoul, Osaka, Chennai, Kuala Lumpur and Suzhou.

The Indian property market will see more investment from overseas this year as it still remains an attractive investment destination globally.

Of this, one-third would be from home buyers and the balance from investors. This is despite the fact that property prices in India are at an all-time high.

According to a recent National Housing Bank (NHB) survey, property prices in big Indian cities have increased by as much as 43 per cent to 166 per cent in the last four years.

NHB, wholly owned by the Reserve Bank of India, lends to home-mortgage companies. It also regulates and refinances social housing programmes. In its report, the bank said Chennai had seen the highest rise in prices at 166 per cent. Bhopal was second with a hike of 117 per cent and Mumbai was ranked third with an increase of 87 per cent.

What then brings overseas investment to Indian property, when prices are skyrocketing? The answer is simple: Despite the global turmoil because of the financial crisis, the Indian economy has remained robust, largely due to domestic-driven demand.

According to Jones Lang LaSalle, India’s strong economic growth, rapid urbanisation, growing middle-class population, demographic advantage and increased thrust on infrastructure has worked in its favour. Buying property is especially popular among Indians living abroad, who all seem to want a piece of the homeland. That is why Indian property shows are burgeoning around the globe.

Dubai-based Sumansa Exhibitions has been holding Indian property shows across five countries. And every year the number of developers taking part in the shows and the attendees has grown rapidly.

Sumansa Exhibitions’ chief executive officer Sunil Jaiswal says: “We have held shows in the UK, South Africa, Hong Kong, Dubai and Singapore. They have been very well received by both exhibitors and visitors alike.”

This year Sumansa will hold the Indian Property Show in Singapore on April 14 and 15. It will be held at the Suntec Exhibition Centre’s hall 401 and nearly 40 developers from across India will be part of the show.

More than 200 properties will be showcased during the two-day exhibition. Sumansa expects the number of footfalls at the event to be much larger than the 4,000 that turned up at its last year’s event.