Offering opportunity to the NRIs who wish to own a home in India, HDFC Ltd presents a property fair in Muscat. The two-day property fair will take place on January 31 and February 1. 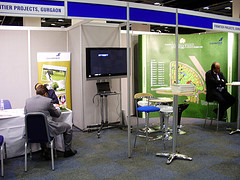 Property exhibition, presented by HDFC, will act as a plaform for the NRIs in Musket to own Indian Properties.

India’s Premier housing finance company HDFC Ltd will host a two-day property fair in Muscat, enabling the NRIs to know more about the prime properties located across India. The two-day property event, which will have properties exhibited by 32 developers of good reputation, will be held at Hotel Muscat Holiday.

Mr. JS Mukul, Indian Ambassador to Oman, will inaugurate the property event in the presence of Mr. Ajay Sachdewa, HDFC Middle East Regional Head. This property exhibition titled ‘India Homes Fair’ will be opened to the visitors from morning 10 am to evening 8 pm. END_OF_DOCUMENT_TOKEN_TO_BE_REPLACED Since the home prices continue to surge in the financial capital of the country, one of the leading real estate developers of India, Lodha Developers have come up with the tallest residential tower in Mumbai. For the financial support, Lodha is negotiating with foreign as well as local financiers.

A banker informed that the Lodhas have approached the property fund of mortgage giant HDFC for over Rs 1,000 cr. and the leading Singapore funds, GIC and Temasek.

Presently, the world’s tallest residential tower is in Australia, known as Queensland Number One which has a height of 322.5 metres. While due to the market downturn, some of the major projects in the West are put on hold, there’s some movement in the Middle-East. Dubai is to come up with a tower of height 516 metres having 120 floors.

The New York architects,Pei Cobb Freed and Partners, who have designed some of the most lavishing architectural marvels across the globe, around 200, are to be hired by the Lodhas for this tower.  Some of their famous marvels are Bank of China Tower in Hong Kong, Louvre Pyramid in Paris and John Hancock Tower in Boston.

We often hear that real estate has a new concept for middle class family, which is so called “Affordable house”. Almost everyone showed a positive attitude for such concept because when it comes about a middle class family, everyone thinks about the cost. But is this concept feasible? Almost all developers are offering 1BHK flat in far-flung are with a name “Affordable house”. According to Mr. Deepak Parekh, chairman of HDFC, “Affordable housing is not about box-sized, budget homes in far-flung places where there is no connectivity to work places and little surrounding infrastructure”.

Affordable house should be such a housing solution which has economic sense in terms of proximity of work place. This concept also requires public and private sector collaboration.