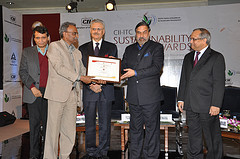 The award was instituted by the CII-ITC Centre of Excellence for Sustainable Development in the year 2006. The award is considered as a unique initiative of CII- ITC center for identifying and appreciating the domestic firms for their excellent performance.  CII- ITC center considers entire dimensions of the firm including its environmental, economic and social dimensions of their operatives. END_OF_DOCUMENT_TOKEN_TO_BE_REPLACED

A report was released on Tuesday according to which Indian realty sector might face problem of plenty with office rental space. A further drop in rentals is also expected. As per the report presented by Jones Lang Lasalle Meghraj(JLLM) and Confederation of Indian Industry (CII), the vacancy level in India will increase from 17.2% in 2009 to 20% by the end of 2010.
The report stated that during the first quarter of 2010, most Indian cities have experienced an upward movement in the volume of lease transactions. There have been recorded around a million sq. ft. of leases in each of the cities; Delhi, Hyderabad and Mumbai.
For the future, the report predicts that within the next three quarters, most micro markets are expected to reach their rental lows. This implies that even after balance of power favors the occupiers, the opportunity for then is diminishing with every passing quarter.
The report “The Seven Stars of India India’s best performing micro markets for occupiers” gives the prediction about real estate rental market in cities like Mumbai, Delhi, Bangalore, Chennai, Kolkata, Pune and Hyderabad.