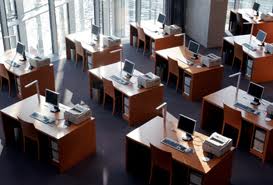 Stability in office space demand keeps the office space rentals stable. However some zones showed even an increase in rentals.  As per real estate experts’ opinion office space absorption is to reach four million sq. ft. by the end of 2012. Real estate consultancy company C B Richard Ellis (CBRE) points to the existing vacancy level as reason of slowed down demands across the country.

Considerably around 5 million sq. ft. of office space had been completed in the third quarter of 2012. This is comparatively lower to the 9 million sq. ft. in the previous quarter. This figure shows a decline of about 47% on a quarter-on-quarter basis.

CBRE South Asia Pvt. Ltd.’s chairman and managing director Mr. Anshuman Magazine added that the first half of 2012 had witnessed a rise in office space absorption. 2012 third quarter’s figure (of supply) affirms the fact that the decline in office- space- demand was expected.

Absence of quality supply and risen demand has stabilized the rentals. Meanwhile it generated a marginal rental appreciation of 2 to 3% over the previous quarter (April-June) in the IT sector. At the same time value remained unshaken in non – IT sector.

Real estate advisors Jones Lang LaSalle’s Pune Managing Director Mr. Sanjay Bajaj said that the Grade- A office space supply has minimized due to the rise in rentals. The rentals in prime areas have gone up by a margin of more than 10 to 12 per sq. ft.  The earlier rental which stood in between 28 to 30/ per sq. ft. in 2010 has gone up by 40 now within a time period of two years. In some of the prime locations rentals reached the 60/ sq. ft., Mr. Bajaj added.  This shows a double fold increase.

The CBRE report further added Pune real estate market will be driven by the banking- financial services and insurance segment (BFSI) in the coming quarters.  They are likely to drive office space demand in the Off CBD and PBD (peripheral business district) locations.

According to the opinion of Mr. Bajaj, good quality Grade A space is available in SEZs in the western parts of the city like Hinjewadi.

Pune seems to benefit out of this slide in demand for office space. This is mainly caused by the unaffordable rentals. Moreover the situation is well supported by other high end works like engineering R&D which move towards the city. In the opinion of Mr. Bajaj this movement towards the city will ensure higher demand and rentals.