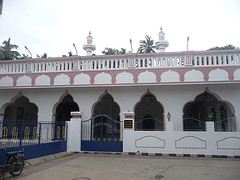 Real estate firm faces sue from the Wakf board.

The base of the case begins with GHMC (Greater Hyderabad Municipal Corporation) sanctioning a real estate firm to construct a commercial structure near Mumtaz Mansion in Lakdi-ka-pul. The GHMC sanction of a G+4 commercial building was granted to an extent of 2125 sq. m.

The real estate builder soon started foundation works at the site. Later it came to light that some graves were damaged while foundation works were going on. This was reported to the chief minister as well.

Inspections carried out by the SWB found that nearly 621 sq. m. of Wakf property was infringed by the real estate developer. The Wakf property included some graves and some area belonged to a mosque.

The commissioner of GHMC blamed the real estate developer for gaining permissions through fraud ways. The official said that the real estate builder had shown different plans for obtaining the approval. In one of the plans the graveyard was included while the other missed the graveyard. The first proposed plan included the memorial site while the latter one did not.

Sources close to the SWB disclosed that the board will move hard against these intruders. The board is said to file a case against the real estate builders for the compensation.