In a severe move against the land intruders, The Noida Authority freed nearly 90 acres of government land. The estimated real estate market value of this land falls around Rs.10,000 Cr. 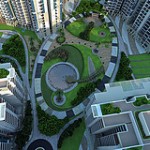 Noida Authority on Thursday trampled nearly 90 acres of land from three major sectors in Noida. This act of the Noida Authority was seen as their move to toughen its attitude against land intruders.

Half a dozen bulldozers were used for the demolition. Around 200 scrap dealer’s rough-and-ready structures were demolished thoroughly.

A Noida Authority official said that the land encroachers are very strong and active in the area. Many of them have constructed their buildings in the government land, the official added.

The current price for this prime real estate land would be well above Rs.10,000 Cr. Noida Authority had purchased this land many years back. An official said that this land is reserved for industrial and institutional use. The Authority plans to create a fence around the land to avoid all sorts of future encroachment.

Failures of beginning their constructions in time will cause them lose their approvals, said an official in the Noida Authority.

The notice which decrees the flattening of the illegal constructions was issued by the Authority in February. The encroachers will be charged with fines to meet the Authority’s expense for the demolition, the notice clearly states.

Increased numbers of complaints are reported from various sectors of Noida. This has prompted the Authority to take a new policy- ‘check encroachments.’ The officials warned that the anti- encroachment operation will be continued till all the illegal constructions are pulled down.