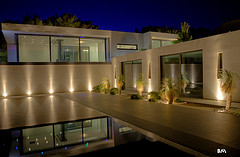 Cushman & Wakefield India reported to Times of India (TOI) that nearly 50% of total luxury housing units are launched in Bangalore. Pune’s contribution is about 8%.

Cushman & Wakefield India’s executive director Shveta Jain said that despite the sluggish behavior of real estate market there has been a demand in the luxury housing segment. According to her this is mainly due to the increased number of HNIs (high net worth individuals).

Comparing to the two of 2011, three luxury housing projects are launched in Pune in 2012. Each unit carries a price tag above Rs.1 Cr. The price goes up to Rs.7 Cr. But the total luxury housing units has increased by 250% in Pune. This is well above the increase of total housing units by 170%.

Sanjay Bajaj, MD of JLL Pune opined that Pune holds a relatively better demand ratio for luxury housing segment in the whole country. He pointed to the better amenities and lower and exciting land prices of the area.