PATNA: The name of Chris Gayle is absolutely popular among all who love cricket. Doubtlessly, he is one of the most favorite players in the IPL 2013 too. His popularity reached new bounds when he scored a mammoth 175 from just 66 balls.

Chris Gayle is made the brand ambassador of a real estate firm.

He is now more popular than ever. In fact he is loved not only by the fans of Royal Challengers Bangalore but also of all who love cricket and IPL. Chris Gayle plays for the Bangalore based IPL franchisee. Even his opponent team-fans do wish to see him scoring high scores.

Now the IPL fever is seen everywhere and so does the popularity of Chris Gayle. Increasing popularity of this tall cricketer has brought him many endorsement deals.

Now to the latest of endorsement deals, he has signed the deal with a realty firm. Now on he will endorse Patna based Agrani Homes which have made him the brand ambassador. 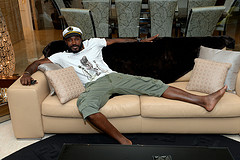 The endorsement deal with Chris Gayle was announced by Alok Kumar, CMD of Agrani Homes. He announced the decision to make the Jamaican Cricketer his group’s brand ambassador during a special function arranged in a hotel.

Speaking about his deal with the real estate firm, Chris Gayle said that he was happy to associate with the firm. However he refused to speak anything about cricket. He neither spoke about the chances of his team Bangalore Royal Challengers to win IPL 2013.

The venue was absolutely crowded. The huge crowd has been following him from airport to the hotel with the aim to gain a glimpse of their favorite cricketer. The realty firm hopes to convert the popularity of Chris Gayle into sale of their projects.

1 thought on “Chris Gayle Signs To Endorse A Realty Firm”