After hearing the request of the Securities and Exchange Board of India; the Supreme Court has asked SAT and Allahabad HC to halt all proceedings on the pleas filed by Sahara firms.

The Supreme Court, after hearing the request filed by Securities and Exchange Board of India, halted Allahabad High Court and the Securities Appellate Tribunal from hearing all the pleas filed by SHIC, SIREC and Subrata Roy. END_OF_DOCUMENT_TOKEN_TO_BE_REPLACED

On Monday, Supreme Court gave one week time to both Sahara firms and Subrata Roy for replying to the contempt petition filed by Securities and Exchange Board of India. END_OF_DOCUMENT_TOKEN_TO_BE_REPLACED

Securities & Exchange Board of India, SEBI the market regulator, asked the Supreme Court of permission to arrest Subrata Roy, the chief of Sahara Group of companies. 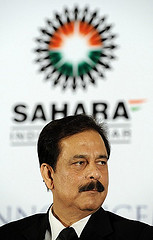 SEBI demands the arrest of Subrata Roy, the chief of Sahara.

SEBI has decided to go harsh against the Sahara Group of companies. This was all the more clear with their appeal to the Apex court for permission to arrest the Sahara Chief. SEBI has demanded the arrest of Subrata Roy Sahara.

Along with the Sahara Chief, other two directors like Ravi Shankar Dubey and Ashok Roy Choudhary also are likely to be arrested soon, if the Supreme Court permits the market regulator; for their failure to comply with the SC order, given on August 31 last year.

As per the August 31 order, two Sahara Group firms– Sahara Housing Investment Corp and Sahara India Real Estate Corp were ordered to pay a fine of over Rs.24000 Cr to the investors. The fund was raised through OFCDs.

However, the apex court; finding some illegality in the list of investors, asked these firms to pay off the fund with the market regulator. The order further had empowered SEBI to seize the properties of the firms, in case of failure from their part to pay the amount in time. END_OF_DOCUMENT_TOKEN_TO_BE_REPLACED