With the foreign direct investment policy of the central government, the realty developers were expecting foreign retailers to set up their outlets and stores in India. Developers thought they could find some takers for their vacant spaces in their shopping mall projects. END_OF_DOCUMENT_TOKEN_TO_BE_REPLACED

Bangalore is one of the prime IT hubs in India. It is known for its IT development. Temperate climate, end-user oriented residential sector, stable property prices, etc. were some of the most used adjectives for Bangalore city. Adding to all these is the top position for developing most number of housing projects for the ‘seniors.’ END_OF_DOCUMENT_TOKEN_TO_BE_REPLACED

MUMBAI: Oracle has signed a lease agreement for its Indian arm Oracle India Pvt Ltd. The IT major has leased large sized office space in the Bandra Kurla Complex in Mumbai. The group will lease 50,000 sq. ft. of office space.

Oracle India will have to pay Rs.340 per sq. ft. for gaining office in the BKC which is one of the most costly office spaces across India and Asia Pacific Region. The lease agreement will be for a term of nine years.

One floor will be fully leased by Oracle India. The transaction worth Rs.183.6 Cr is the largest lease transaction in FIFC. First International Financial Centre (FIFC) is a Grade-A commercial development in BKC.

END_OF_DOCUMENT_TOKEN_TO_BE_REPLACED

While senior executives of JLL could not be contacted for comments, a person with direct knowledge commented that the investment will be in the commercial sector. He added that the real estate consultants are looking for higher returns from their investment and for this commercial realty is better now. END_OF_DOCUMENT_TOKEN_TO_BE_REPLACED 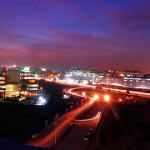 Realty glitters in the diamond city. Real estate sector has witnessed a 100 per cent growth in the past two years, aided by a number of factors like vertical development, business opportunities and influx of people from other places.

Chairman CREDAI, Surat, Tarun Rawal said, “On-going development of mass transport infrastructure and planned town planning schemes in the city has given confidence to people to go to faraway places to live. Hence, small sector projects – 1,500 sq ft houses – have gained a foothold in the city.”

Surat was the only city where people used to buy and sell properties without documents, but now awareness is growing. “Now small units have started to come up in huge numbers,” said Harshil Daliwala of SNS Builders.

The city is estimated to be spread over in an area of 326 sq km. It could further expand by another 200 sq km. “There is a plan to convert Surat-Navsari into twin cities which will together have a population of 1.15 crore people,” Surat Municipal Corporation’s director of planning Jivan Patel said.

Jones Lang LaSalle India, a global research firm in the real estate sector, says that prices of residential units in India in the next six months should witness marginal appreciation. JLL says: “Over 60% of residential launches in the Top 7 cities (mostly in cities other than the NCR and Mumbai) are priced in the range of Rs 2,000-4, 000 per sq. ft., which meets the demand of middle-income buyers.”

At the same time, the RBI has given sufficient indications of probable cuts in key rates during second half of 2012, which will improve affordability for homebuyers and provide lower interest costs for developers. This will help in increasing the demand for residential units in the country. JLL also argues that even in the present bad condition, prevailing absorption rates are at nearly 10-12 %, which translate into an average absorption period of 8-10 quarters for a residential project. “This implies that at average prices, any average residential project should be sold out before construction is completed in around three years from the launch.”

JLL says that new project launches, which were slow in Mumbai and the NCR in the first half of 2011 due to approval and land acquisition issues, have now started to pick up. This should improve cash flows for developers having large land banks during 2012. A number of builders have acquired huge land banks on borrowed fund. As the builders pay huge interest rates, nearly 15-18 % on the borrowed fund, the servicing of debts has put huge strain on their finances. Any improvement in off-take is likely to release them from the financing pressure.

In the present slowdown condition, despite bad financial conditions, builders are not cutting the prices as in most parts of the country; they have priced their projects at nearly cost prices. “With rising input costs, developers do not want to sell below a threshold, which does not justify their minimum replacement returns,” JLL says. “This leaves home buyers with a small window of opportunity – the next six months – when home prices should witness marginal appreciation. After six months, a second wave of high appreciation is predicted.

However, in some of the micro markets in Mumbai and the NCR, the appreciation in prices was even sharper. In the last two years, in some of the markets like Gurgaon’s Dwarka Expressway, prices have almost doubled.

Overall, the Indian real estate market went through a slowdown in the last one year. But, all the predictions of a hard landing for the residential property market in 2011 and 2012 have failed to come true, so far.