AHMADABAD: Gujarat is one of the most sought after locations for realty investment. The report of the Associated Chambers of Commerce and Industry of India proves this.

Gujarat bagged over 40 per cent of the total realty investment in the last fiscal..

When investment in most of the states declined, Gujarat saw a rise in the investments, said ASSOCHAM’s national Secretary-General D.S. Rawat. He stated while he was releasing their study-report.

Kerala too received more investments. The investments in the state rose by 550 per cent. While it stood second, with 400 per cent growth rate, Uttarakhand stood third. The list was followed by Rajasthan which saw a rise by 175 per cent. 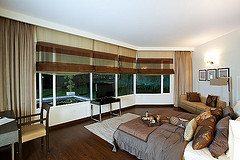 Gujarat saw a huge increase in the realty investment.

Most of the other states, saw declining investments. Some of them saw decline by over 50 per cent.

Realty investment fell mainly because of the lower home sales and sluggish market. High interest rates, rising cost of construction, etc. are other reasons which destroyed or hurt the investors’ sentiments.

1 thought on “Realty Investment in the Last Fiscal, Gujarat Tops”