Cushman & Wakefield reported that PE investments in India rose by seven percent in the year 2012-13. Over Rs.6200 Cr was invested in India by the PE firms. 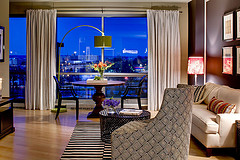 The property consultants report that the Indian realty market is one of the top real estate investment markets in the world. It was ranked 20th.

The returns are minimal as against the higher expectations. The margins are shrinking, adds Mr. Chaudhary. His firm has invested in many projects -including residential, mixed use and integrated satellite urban villages.

Though Delhi-NCR as a whole witnessed a growth in PE investments, Gurgaon witnessed a steady fall.

The trend has undergone wide changes. Earlier the PE firms used to consider the cost of clearances, approvals and so on. They used to invest in projects even when it was in the planning level.

Now the PE investments are made only when the projects is ready. Further the firms are not ready to consider the cost spent for other things like approvals. However there is no data available to prove how many PE firms have invested in Delhi-NCR.