The top A/C manufactures are getting contract for centralized cooling system mainly from the commercial projects. Thus a slowdown in the commercial sector affects these firms.

Last year was a year of sluggishness for both commercial real estate as well as the A/C manufacturing firms.

The current year, on the other end, has shown some signs of improvement in the office space demand, which will in turn boost the commercial sector. This has provided some hopes to the A/C manufacturing firms too.

Blue Star India alone has lost Rs.104 Cr in the last year due to the sluggish commercial realty. This year the firm expects better turnover as the sector has showed some signs of improvement.

If the report of Cushman & Wakefield is to be believed, the demand for commercial space in India is expected to reach over 160 million square feet by the year 2014. According to the report, major cities like Bangalore, Delhi-NCR and Mumbai will bag major share of commercial space. 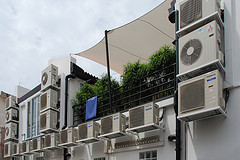 Last year the office space demand fell mainly due to the weak demand of IT and ITeS sectors. DTZ India and Cushman & Wakefield report that the demand has fallen in India by 23 percent.

RICS India Commercial Property survey stated that the demand was stable in the third quarter of last year. It also reported that India reached the ninth spot in the fourth quarter from the nineteenth of the third quarter.

It means that the demand for office space is increasing in India, giving better hopes to A/C firms and various other industries dependent on commercial sector.