Noida real estate gets another tall residential project with the launch of Brys Tower. This is an indication to the growing land deficiency in Noida. 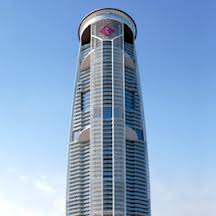 300 meter tall Brys Tower is going to be one of the tallest residential projects in Noida.  Moreover it is, after completion, going to be the tallest in the entire NCR even. This is to be located in Sector 150 in Noida.

This latest Noida residential project is expected to be delivered to the people within 4 years of time. The company hopes to invest an amount of र 1000 crore for in this project.  The company officials said that the projects will have 285 premium standard apartments and some magnificent villas.

The Chairman of Brys Group Mr. Rahul Gaur, spoke out that the group aim at higher class professionals like CEOs, CFOs and other highly rich class people. Mr. Gaur continued saying that the Brys Tower will remain as the best option for those who wish to lead a grand life of international standards.

Mr. Gaur had developed many successful residential projects in NCR. But all these projects were in his first real estate firm Gaursons.

Brys Tower consisting of G+81 floors will spread over to around 10 acres of land. Mr. Gaur pointed out the difficulty in acquiring land as an issue of greater concern.  Land has become a shrinking commodity. So the best way to opt is vertical development.

Brys Tower is the second of its kind in Noida. Previous year had witnessed the launch of Supertech tower with the same height. Supertech Supernova was launched at Noida, Sector 94 in the year 2011.

According to a real estate analyst resale problems will keep away the short term real estate investors. He points to the higher cost of the apartment is the factor which works as a hassle and block in resale.

Pointing to the higher construction cost of such sky tall buildings and the lack of short term investors, he added that the builders will face financial crunch. Answering to this problem Mr. Gaur said that the group aims not at short term real estate investors but end users.

The real estate company Brys plans to prepare apartments and villas. Apartments will be offered at varying sizes starting with 3 BHK and extend up to 6 BHK. The expected price of each will fall between the range from र 3 to 9 crore.