NOIDA: Construction laborers, alleging a developer for not paying their wages, turned violent on last Saturday. The violent laborers set four vehicles on fire, besides damaging the developer’s office. 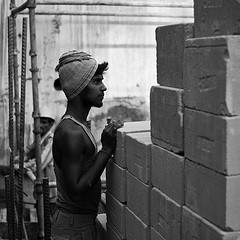 During the protest two of the construction laborers were injured as the security guards who fired into the air. Though the firing was meant to disperse the protestors, it injured two. Later the guards were arrested.

The incident took place in an under-construction residential project of 3C Company. To suppress the violent construction laborers, police force from four stations in Noida had to reach the site.

While bringing damage to the company office, four vehicles – including two bikes and two cars which were parked outside the office, also were set fire. Computers, laptops and glass panes also were damaged in the office. 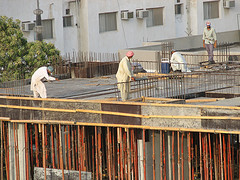 Construction Laborers set four vehicles on fire during their protest.

A senior police officer narrated the incident in this way. According to him, nearly 1000 construction laborers queued in a line which was broken when someone pushed a mason from the line. Manoj Pandey, a guard, objected the entry of protestors to the site. This caused the clash.

While workers tried to enter the site, they were opposed by the guards who then fired in the air to disperse them, injured two protestors. The injured protestors are identified as Jinarul and Mohammed Alam. While the bullet pierced the leg of the former, the latter was injured on his neck.

Doctors at Yatharth Hospital in Greater Noida, where Mohammed was rushed into, said that his condition is critical.

Four people have been detained by the police. The clash lasted for about half an hour. Now the situation is under control, said SSP Preetinder Singh, who added that more police force is employed at the site.